Eesmyal gave a rousing presentation on June 23, 2010 to over 2,000 people at Pecha Kucha Vancouver‘s special edition event called Walk the Talk, Green Your City.  He spoke about his various green building and collaborative projects, such as the Green Building Brain, the Vancouver Design Nerds, and the collaborative workspace project called The HiVE.

Check out his presentation here:

Designed by Boni Maddison Architects, Friendship Lodge is a multi-unit residential building aimed at low-income housing for adults who are working toward managing mental health or addiction issues. Developed under the Provincial Homelessness Initiative and in partnership between BC Housing and Prince George Native Friendship Centre, the project earned LEEDÂ® Canada NC Gold Certification on May 10, 2010. Recollective’s primary role was to manage the LEED documentation process and support the sustainability initiatives of the design team. 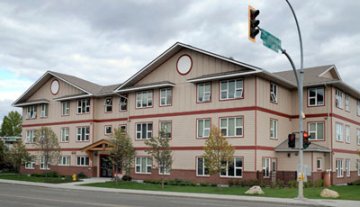 The building is a three-story wood frame construction with a total of 30 one-bedroom units each with their own kitchenette and washroom. Common spaces include a lounge and multi-purpose room, laundry facilities on each floor, a courtyard and storage lockers. Friendship Lodge utilizes a ground source geo-exchange system that provides energy for radiant in-floor heating and cooling, domestic hot water production and make-up air heating and cooling.Â  Ventilation air is ducted directly to suites and into corridors. Heat is recovered from suites and common spaces and fed back into the main loop. CFL fixtures and occupancy sensors are used throughout the building to reduce lighting power requirements. These measures resulted in a 46% reduction in energy consumption and a 52% energy cost savings compared to the Model National Energy Code of Canada For Buildings (MNECB) reference building. We would like to draw your attention to an exciting professional development opportunityâ€”the inaugural UBC Summer Institute in Sustainable Urban Design, taking place July 18-23, 2010 in Vancouver, British Columbia. The Institute is co-hosted by the Design Centre for Sustainability in the UBC School of Architecture and Landscape Architecture, Faculty of Applied Science and UBC Continuing Studies Centre for Sustainability. Recollective is a partner supporting the Institute, along with the Royal Architectural Institute of Canada; Real Estate Institute of BC; Canada Green Building Council; Light House Sustainable Building Centre and Sustainable Cities.

This UBC Institute in Sustainable Urban Design is a one-week intensive course for leaders and professionals who want to push the urban planning and design agenda to protect our climate and achieve sustainability, prosperity and equity. To this end, the Institute will expose participants to global perspectives; innovative and transferable tools; and leading-edge projects. More information about the Institute, speakers and agenda is available at http://www.cstudies.ubc.ca/sustainability/sustainable-urban-design/index.html

If you are interested in finding out more, please contact sisud@cstudies.ubc.ca or call Rachael Cabrera at 604-822-6672. If you heard about the course through Recollective, you will receive a 10% discount on the course fee by quoting code RECOL1420.

JACK CUI has become a member of an elite group of Certified Energy Managers (CEM).Â  This group of energy management professionals serves industry, business, and government throughout US, Canada, and in 21 countries abroad. The CEM is a professional certification issued by the Association of Energy Engineers (AEE).

According to the AEEâ€™s web site, since its inception in 1981, the Certified Energy Manager (CEM) credential has become widely accepted and used as a measure of professional accomplishment within the energy management field.Â  It has gained industry-wide use as the standard for qualifying energy professionals both in the United States and abroad. It is recognized by the U.S. Department of Energy, the Office of Federal Energy Management Programs (FEMP), and the U.S. Agency for International Development, as well as by numerous state energy offices, major utilities, corporations and energy service companies.

BJORN RICHT became a licensed Certified Energy Advisor (CEA) for EnerGuide for New Homes, in December 2009. As an energy advisor, Bjorn has completed all the training and supervised blower-door testing required by the Canadian Home Builderâ€™s Association of British Columbia (CHBA-BC) and the Office of Energy Efficiency of Natural Resources Canada.

EnerGuide is a national program that shows a standard measure of a new homeâ€™s energy performance. This rating demonstrates to homeowners how energy efficient their home is.Â  In British Columbia all new homes are required by the building code to achieve a Energuide rating of 77. In the City of Vancouver an EnerGuide evaluation report is to be submitted prior to final inspection of the home.

Vote for Brenda for the YWCA Connecting the Community award!

Brenda has worked for more than a decade both professionally and on a volunteer basis to transform the building industry by creating capacity to design and build affordable, resource- and energy-efficient buildings. In 2006 Brenda co-founded Recollective Consulting, the first company in Canada with services devoted to sustainable building consulting. A true trailblazer, Brenda demonstrated vision and innovation by founding Recollective at a time when a â€œgreen building consultantâ€ was an unknown profession in Canada. Committed to building industry capacity, Brenda mentors both client firms and upcoming sustainable building consultants.

â€œAs a business owner in the Downtown Eastside I see the consequences of the lack of safe and affordable housing and services for the homeless every day. We work with BC Housing and are helping to provide over 20 housing facilities with support services throughout the provinceâ€”I support the YWCA providing housing to women and children at risk of becoming homeless.â€